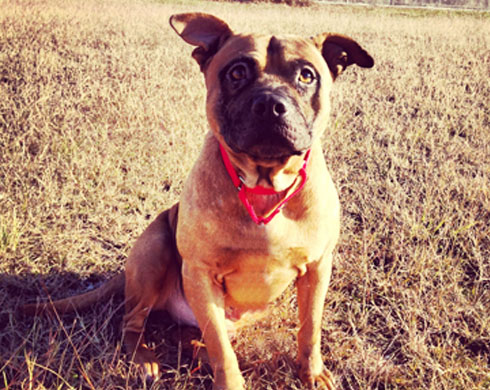 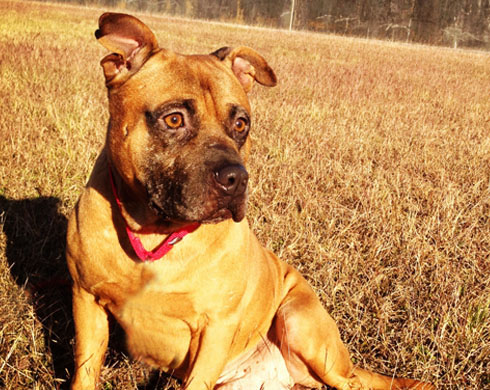 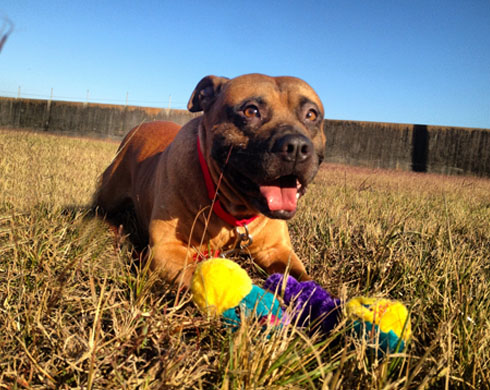 This little pint size squat, was a part of a 27 dog seizure out of Alabama.  Like so many of our dogs, Charlie Brown was confiscated from a dog fighting raid.  He still carries the old scars of many battles and despite living in horrific conditions, one would never know it by watching the way he wiggles and waggles and sports that non-stop smile. Charlie ADORES every single person he meets and spends most of his day running from person to person and crawling into their lap. Though we haven't fully dog tested him yet, he appears to actually want to make friends with them which of course makes the whole dog fighting thing even more heartbreaking. Living proof of a dog that didn't want to fight.  Since being here, he has become wonderfully crate trained and LOVES being inside and exploring every room in the facility.  He's great in the car and LOVES anything fluffy: your slippers (okay he prefers my pink ones), a stuffed animal, a pair of Uggs (ugh is right) but….he just likes to carry them around like his little babies.  So here's the final low down on Charlie Brown.  HE IS ABSOLUTELY THE FAVORITE DOG AT VILLALOBOS AT THIS TIME……if he doesn't get adopted out soon, any potential adopter will have to fight us off for him because as it stands now….we're all fighting to see who gets to keep him.  This little pot belly piglet is by far, one of the most wonderful dogs we've EVER had here.  Won't you be his Snoopy?