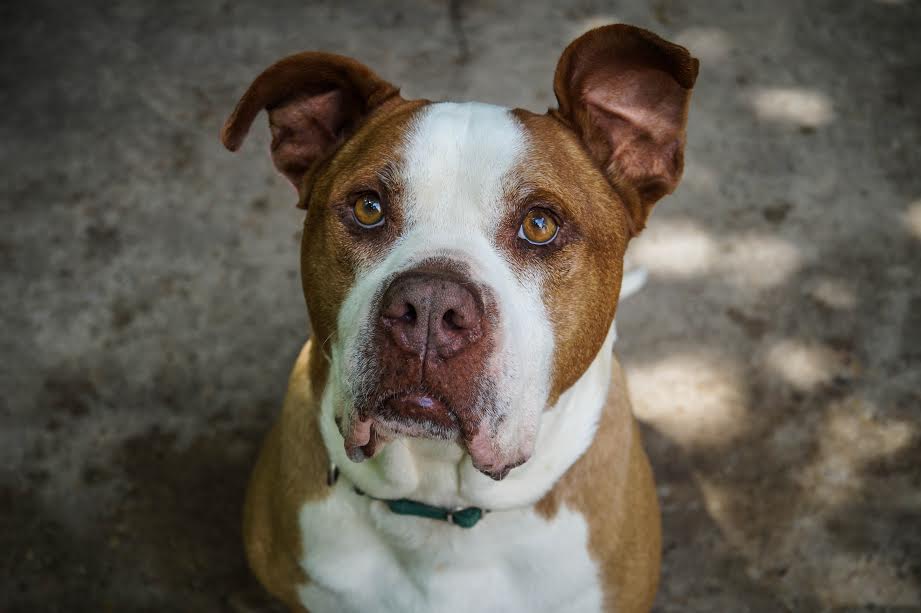 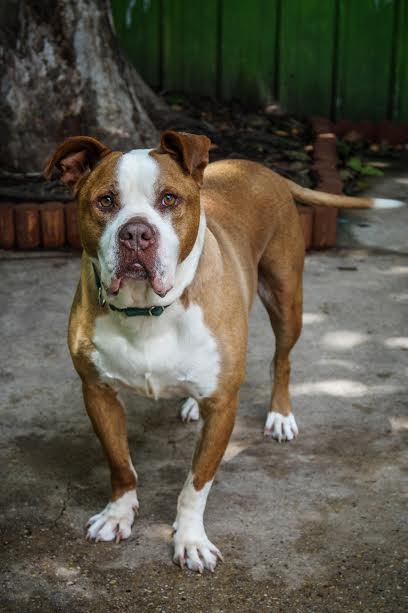 His name is Mr. Wilson and despite having such a strong name, his life has been nothing but neglect and pain.  One hot summer day, we got a 911 email from a woman in a rural part of Louisiana, pleading for help for a dog chained up behind her home.  A “friend” had gone to jail for a very violent crime and he literally chained and staked his dog into the ground to ask her to “take care of him”.  The chain was so heavy that Mr. Wilson couldn’t lift his head off of the ground.   Mr. Wilson’s caretaker was too scared to say anything but she finally pleaded with his owner to at least put a smaller weighted chain on him.  For a short time she tried her best to take care of him with limited funds and 3 Pit Bulls of her own.  Finally she couldnt take it anymore and she gathered up her courage and called us to come and set Mr. Wilson free.

We arrived and were heartbroken at what we saw.  A chain so heavy that I could barely pick it up.  His spine was hunched and his legs bowed, probably from years on this heavy chain.  The once leather collar had hardened into what felt like petrified wood and we had to use bolt cutters to cut it off of his neck because the chain was too thick.  And despite all of this, Mr. Wilson was happy and so grateful for all we had done.  He ran around the grass and peed on every bush, of course in between licks and hugs.  Barely able to see out of his infected eyes, he still mananged to run to our van and practically jump in to a warm crate with lots of clean blankets.  But what Mr. Wilson needs now is a sponsor to help with his vet bills and what he would love more than anything at this time is his very own dog house/igloo.  Not only has this bug ole lug of a dog never had a kind hand to pet his head or slept indoors, but to have a real dog house of his own and filled with fluffy blankets, would give him such happiness.

Because of his neglect, Mr. Wilson has some health issues.  One of them are his eyes.  He just had major surgery in both for entropian (a very expensive surgery)  He is recovering nicely (though he hates wearing his big plastic cone/collar),  any help towards sponsoring this very special dog would be so appreciated.  Once healthy, he is going to make someone a very special companion.  And though we have many special dogs here……a pooch like Mr. Wilson only comes around once in a lifetime.