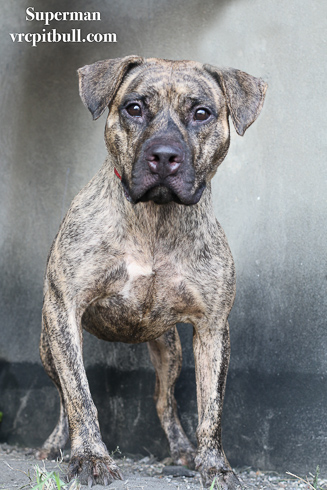 How can you resist his big brown eyes?  I sure couldn’t and this is why he now lives with me (Tia Torres).  But “Supe Supe” (not sure why I call him that..hahaha) did not always have such a great life.  Actually, his life almost ended before it started.

Superman came to us heartworm positive (99% of our dogs have heartworm upon intake).  As we began the preliminary treatment, he went into what is called “caval syndrome” which is a sudden advanced stage of the heartworm.  The worms clog up the main artery to the heart and the rest is too graphic to explain.  Let’s just say it is a matter of minutes, maybe slightly longer before the dog will die unless emergency surgery is done.

This surgery requires cutting open the artery in the neck and pulling out the worms, one by one to allow the blood to flow.  171 worms later…yes…171 WORMS LATER, Superman’s life was saved.  Honestly, most dogs do not make it thru this surgery let alone to the vet in time.

This doe-eyed cutie has put all of that behind him and is still waiting for a home.  He can’t stay with me forever! hahaha  He is a perfect house dog although he can get into mischief from time to time; dragging my throw rugs around, pulling a blanket into his crate BUT for the most part, he is an angel.

When it comes to other dogs, he is “okay” but the problem is he is a lot of dog.  I could see him taking the play too far and it escalating.  When he tries to play with my dogs; Jethro and Lucky, they don’t really care and pretty much ignore him.  But we will further his playing time to see how far we can go with it.

He is such chunky squeezable boy and all he wants to do is sit on you and give lots and lots of hugs and kisses.  But he also has some “giddy-up and go” so he would love to go for a walk or even a run 🙂

If you’re looking for a true hero, this is the guy for you.  Won’t you be his Lois Lane?  Or even his Louis Lane? 🙂